A forum for the discussion of actual scientific events, phenomena, space-related news, etc.

Who plans on watching it - or part of it?

We're in the ~90% zone, and whilst I am scheduled to be in the office that day, I plan on getting outside to see it - with my ever-so-simple pinhole camera. That's a double dose of science!

I plan on watching all of it. My parents' house outside of Murphy, NC is in the path of totality, so I'm planning a long weekend visit with my family. Mom says their subdivision is planning a big party in the cul-de-sac at the end of the street on top of the ridge (well big, for certain values of big. There aren't that many houses and about half of them are weekend/vacation places.). We've got eclipse glasses and Dad and I will be building a binocular filter. I might rig up a pinhole camera just for fun too.
Level I Aug '89-Rockwell
Level II Aug '91-Lockheed Engineering
Level II Aug '92-Lockheed Aerospace-Right Stuff Award
Adult ASA Sept '07-Marshall MS
Adult ASA Train With an Astronaut-Oct '15-Discovery-Commander's Cup, Challenger Award, Alumni Coin
Top

SpaceCanada wrote:We're in the ~90% zone, and whilst I am scheduled to be in the office that day, I plan on getting outside to see it - with my ever-so-simple pinhole camera.

Same here, couldn't get the day off (of course). My eye doctor sent an email that mentioned not looking at it directly, then mentioned eclipse glasses. Apparently, companies make disposable eye shades that are dense enough to look through to an eclipse. I need to find a set of those.
I was a teen in Florida in the 80s, and there was a 30% or so eclipse. Someone gave me a fragment of a welder's mask lens and looked at it through that.
Skidmark
Space Academy: 2012, 2013 and 2014
Advanced Space Academy: 2016 and 2018
Undefeated for winning mission patch designs!
Official Space Camp Ambassador
Top

Even though we are closed on that day, the public library where I work is providing Eclipse glasses, as is our local planetarium. Many public libraries are having special programs on the day and will provide Eclipse glasses, so you could check there as a possibility. I have mine from the NASA booth at the American Library Association conference, so I am ready to go, although we only get 80 percent where I live.
Conan
1988-Adult Lev. I
1994-Parent/Child
1996-Adult Lev. II
1997-Adult AC
1998-P/C
1999-Pilot/Copilot
2000-P/C FL
2000-Adv. Adult Acad
2001-Adult AC
2004-Pilot/Copilot,
2007-Adult Alum.Reunion
2009-P/C
2014 - Adult 4-Day
2015 - Advance Adult Academy
Top

We'll have roughly 97% totality. We ordered early and received our glasses a couple of weeks ago. I saw paper ones at Lowe's on Friday but saw none there on Monday. I am hoping for clear skies that afternoon.
"I wanted to be humble, never arrogant, which is a trait astronauts despise." Mike Massimino
Top

90% totality selfie!
It was noticeably darker and cooler outside. The sky looked like you were wearing dark sunglasses. The pinhole camera worked just as ti should and was super fun to use.

I found a set of eclipse glasses, but even still I only took quick peaks, even with them (as you can never be too careful with your eyes). I tried to take a photo or two through the lens for the glasses, but couldn't get it to focus with a darn.
So cool seeing a tiny sliver of sun as it got close to totality here yesterday!
Skidmark
Space Academy: 2012, 2013 and 2014
Advanced Space Academy: 2016 and 2018
Undefeated for winning mission patch designs!
Official Space Camp Ambassador
Top

I drove up to Tennessee Tech in Cookeville, TN. Experience totality for two and a half minutes. It was amazing!

People were intrigued by my little projector set up, which was fun:

Ugh this is super late but I got some okay photos of the eclipse. I drove a bit north to get totality, but at home we were in ~97%ish! 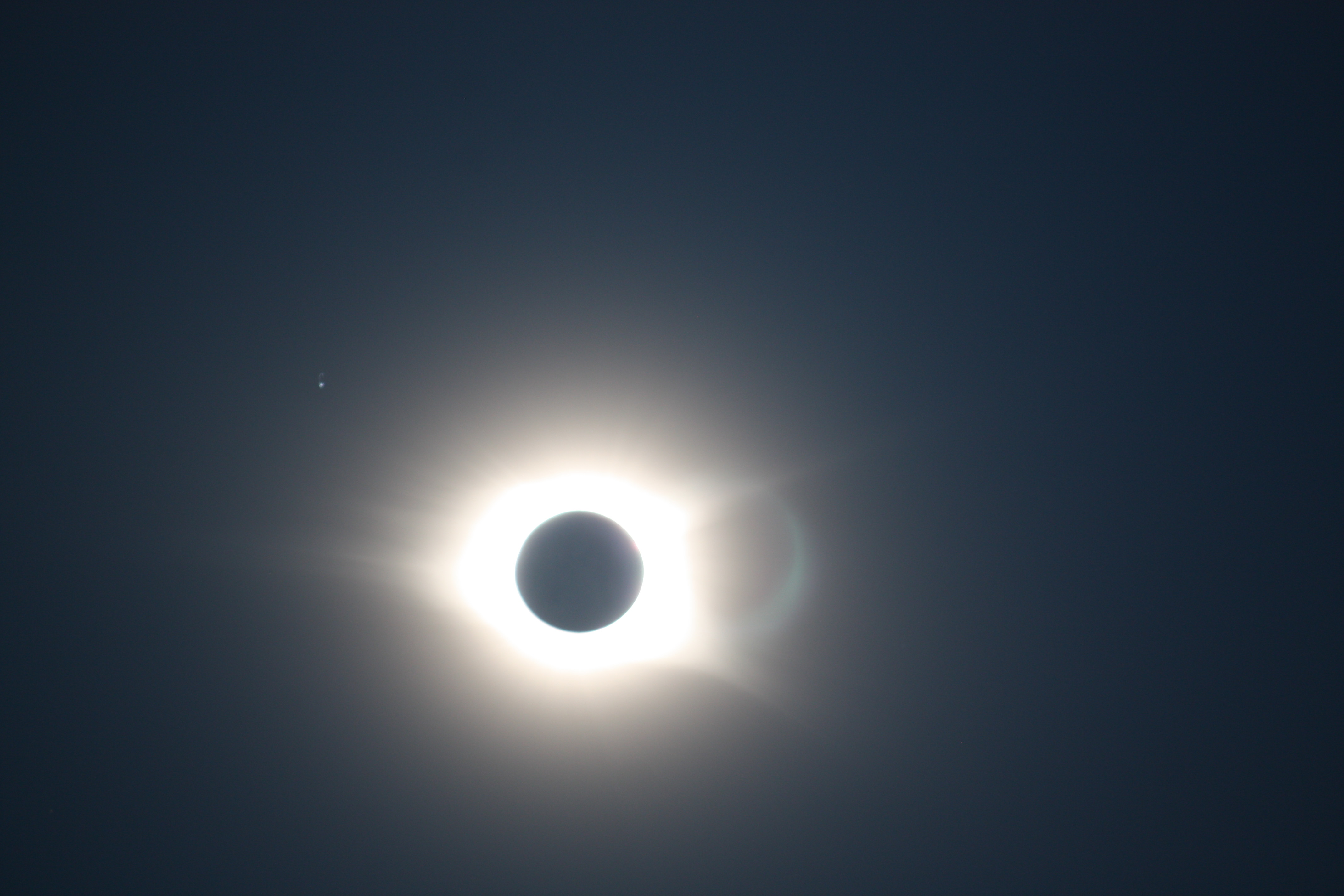 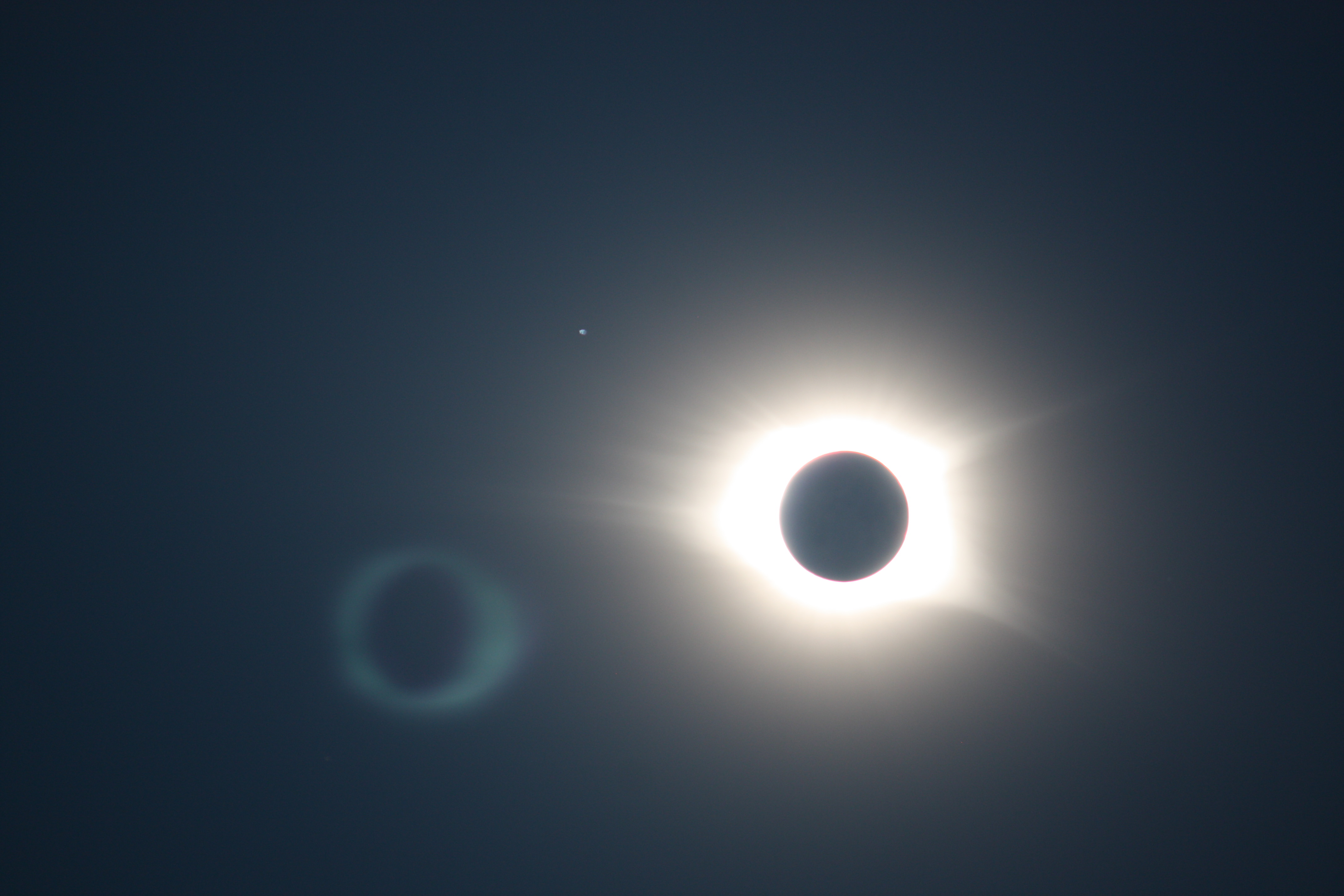 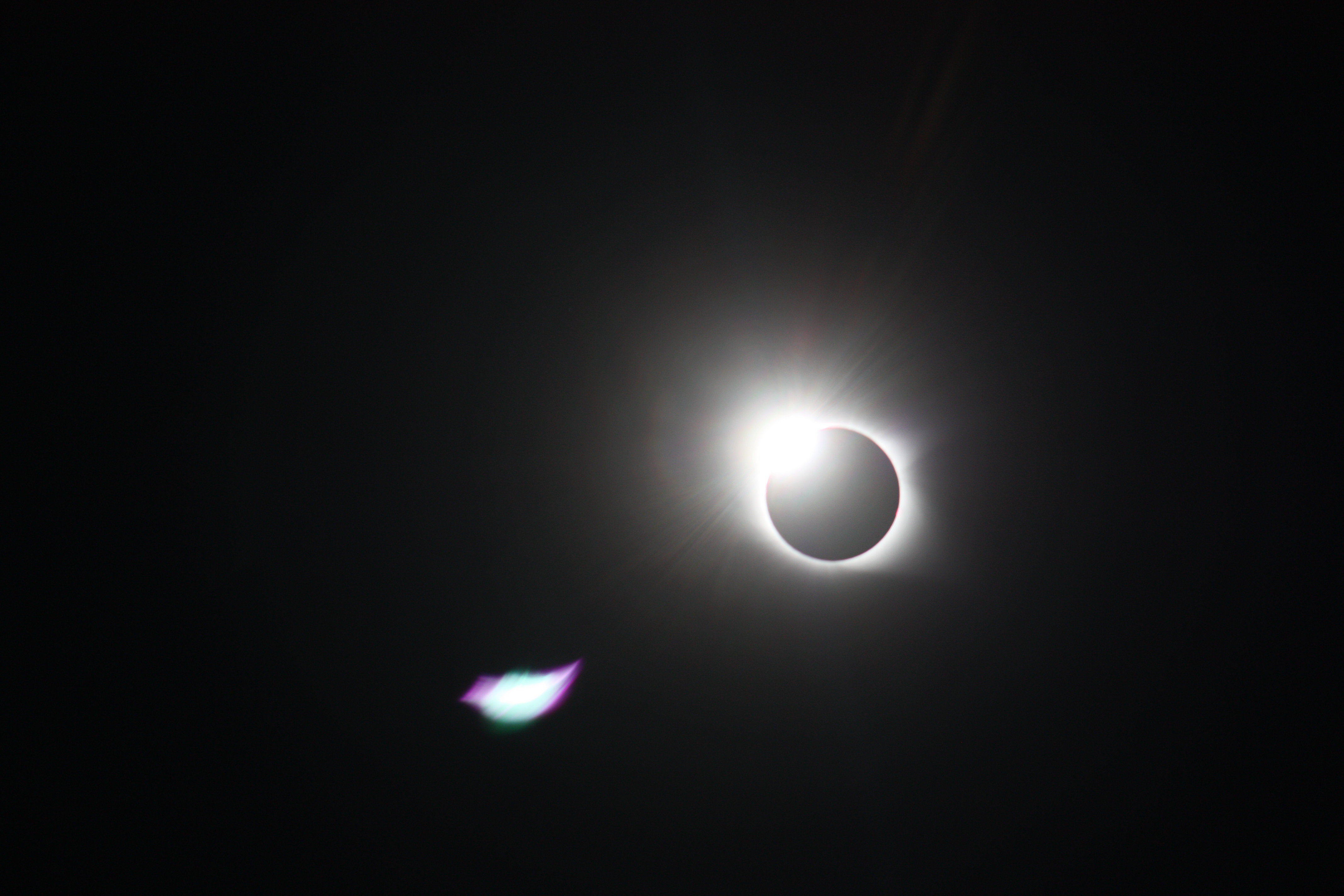 I'm pretty sure that bright dot in the top two pictures is Regulus. Anyone want to confirm or correct that?