I think Photobucket had some issues overnight. It's showing up now.

SpaceCanada wrote:Also, what is the official size of a NASA meatball crest for the flight suit? We want to replace the ones on our SC issued flight suits with Canadian Space Agency ones, but since those are impossible to find, we're going to go with the NASA meatball instead.

You want to go with a 4" one, it's also called a 'vector' as well. I think 'meatball' was a more derogatory name for the design. If you want the real deal, go with this company, they're the official NASA contractor for them:
As for the CSA patches, they're out there (heck, I had a real one several months ago but sold it, sorry). Ebay has a few vendors who sell copies of the older and newer variants, I just found listings for each (and you could get more than one, in each case) looking there.
Last edited by p51 on Wed Dec 18, 2013 1:10 pm, edited 1 time in total.
Skidmark
Space Academy: 2012, 2013 and 2014
Advanced Space Academy: 2016 and 2018
Undefeated for winning mission patch designs!
Official Space Camp Ambassador
Top

Nah, everybody calls it the meatball.

It's the meatball or the (now defunct) worm.
Top

Vincent wrote:Nah, everybody calls it the meatball.

Yeah, but plenty of people at NASA get ticked if you call it that. I heard someone get royally reamed at Houston once for caling it that.
At the HQ in DC, I was once told they try not to use that word. 'Vector' is the more acceptable term for it, from the official stance, anyway...
Skidmark
Space Academy: 2012, 2013 and 2014
Advanced Space Academy: 2016 and 2018
Undefeated for winning mission patch designs!
Official Space Camp Ambassador
Top

Nice G&B jacket! Good deals are hard to come by with them, but every once-in-a-while something nice like that turns up on their clearance page.

I can't believe I didn't post anything on here about this, but last spring I caught a rare G&B sale and broke down and had them make me a custom jacket. So I'll take this opportunity to share!

My jacket is a slightly different style than the one worn by 98% of the NASA guys. Most of the jackets you see are the classic style G&B uniform jacket with the flappy pockets in the front, which I'm not a huge fan at all...they look like elephant ears! Fortunately, in my research, I was able to find images of a few shuttle astronauts wearing the Guardian style jacket, which features a clean, flat front with handwarmer pockets instead. So, I opted to go with that style. The American flag patch was included, but I was never given an option to specify size, so I just stuck with the standard size flag. I couldn't make up my mind if I wanted to sport the vintage US Space Camp patch or my mission patch from camp, so I had them give me a 4" velcro disc on the right breast so I can change them out! So its kinda like I got two jackets for the price of one in that respect. Again, I made sure a NASA astronaut had done the same thing first before deciding to go with that type of customization, and found that Eileen Collins did that with her jacket. Naturally, the vector/meatball was a nice fit on the right sleeve, and the extra Mach 25 patch I had laying around was a no-brainer to go under the nametag (which reminds me, I need to get the more official NASA nametag made up). The "remove before flight" keyring was hung on the sleeve zipper just for an added touch.

So what I ended up with was a "customizable" custom jacket. It can quickly and easily step up from a strictly Space Camp jacket to NASA astronaut jacket just by swapping out a velcro-able patch!
Top

Speaking of Gibson & Barnes, there's some great holiday deals going on right now. One of those rare chances to get one of their jackets or flightsuits at a reasonable price! Use holiday15 as the code to get a 15% discount off of clearance items. I just looked and saw they have plenty of royal blue jackets going between $59 and $99!
Top

I just looked through this blog, until just now, I had no idea there'd ever been Green SC flight suits! 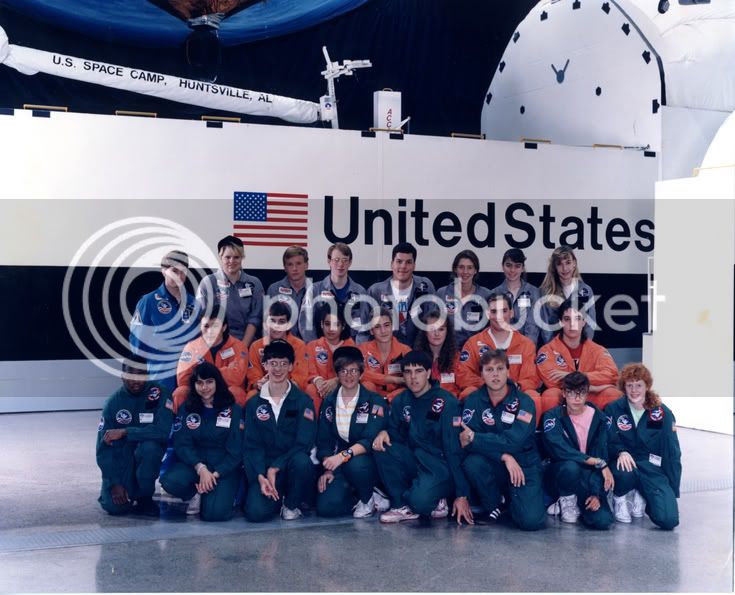 Wow. Here I thought that an SC orange suit was the 'white whale' of SC collecting. There couldn't have been many of these made, now I'm on a quest to find one!
Skidmark
Space Academy: 2012, 2013 and 2014
Advanced Space Academy: 2016 and 2018
Undefeated for winning mission patch designs!
Official Space Camp Ambassador
Top

Yeah i've never seen these on the market anywhere. I can tell you that once upon a time the diffrent colors were used to denote the three tracks for Space Academy Level two. Aerospace (pilot) Engineering (mission Specialist) and i think the third was Technology (Payload Specialist) I believe Green was Aerospace Orange Engineering and light blue was Technology. Not sure if the modern orange ones used at camp today are leftovers or new suits but have never seen the green ones outside of pictures. Even by 96 the last year of Academy level 2 i saw all tracks wearing the regular light blue suits
Jason original callsign Loverboy
SC 1991
SA Level 1 1993
AC Intermediate 1996
ASA 1998
Corporate Space Camp 2005
AC Counselor Summer 07 callsign Boomerang
Adult Alumni Camp 2007
Adult Alumni Camp 2008
Official Space Camp Ambassador
Top

And the different colored Level II flight suits were not available for purchase in the gift shop back then. They were Space Camp-issued suits that you "rented" on team photo day or mission day, much like the orange flight suits. You couldn't buy them, which is why you don't ever-ever-ever see them on eBay. The color-coded Level II flightsuits were a brief late 80s thing, done away with by the early 90s as I'm sure by then the first run of colored flightsuits had been worn out.
Top

Did anyone else notice that in that group shot, most of the green flight suts have the escort T-38 chase plane patches on them? Seems an odd choice...

Hotdog wrote:You couldn't buy them, which is why you don't ever-ever-ever see them on eBay.

Yeah, but I thought the same about the orange ones until I found on on ePay not that long ago, in really good condition.
Skidmark
Space Academy: 2012, 2013 and 2014
Advanced Space Academy: 2016 and 2018
Undefeated for winning mission patch designs!
Official Space Camp Ambassador
Top

This is my latest version of my own suit, this is what I'll be soon wearing to Huntsville!

I had to represent my branch of the military, with a limited-edition Army astronaut patch and army astronaut wings on my nameplate...
Skidmark
Space Academy: 2012, 2013 and 2014
Advanced Space Academy: 2016 and 2018
Undefeated for winning mission patch designs!
Official Space Camp Ambassador
Top

Just moved some patches on my SC jacket around a little, adding my most recent SC misison patch...

I'm seriously thinking of swapping out the academy patch for the alumni one I got in October...
Skidmark
Space Academy: 2012, 2013 and 2014
Advanced Space Academy: 2016 and 2018
Undefeated for winning mission patch designs!
Official Space Camp Ambassador
Top

Do It! Or better yet, do what I did, and put a 4-inch velcro disc there so you can customize your flightsuit/jacket accordingly for whatever occasion.

I did this with my Gibson & Barnes jacket shown earlier in the thread, and this configuration proved to be most lucrative when I went to the Orion EFT-1 launch in December. I sported a Space Camp patch for the alumni events, then on the day of the launch wore an Orion patch in its place. I can also pop a Space Camp Mission Patch in there as well, which saves me from having to litter the layout of my jacket with too many patches and keep that clean look.

When the 4-inch Alumni patches come out, I will velcro one of those as well. The current first-run of Alumni patches are a bit undersized and will not work for this, but we are taking care of that with the next production run.
Top

Hotdog wrote: The current first-run of Alumni patches are a bit undersized and will not work for this, but we are taking care of that with the next production run.

I had no idea that 4" ones were coming. I'll just hold off until then...
Skidmark
Space Academy: 2012, 2013 and 2014
Advanced Space Academy: 2016 and 2018
Undefeated for winning mission patch designs!
Official Space Camp Ambassador
Top

Yeah the current Alumni patches are 4 inches overall, but the SLS sticking out makes the disc portion of the patch undersized for these types of applications. Like I said, this minor issue will be corrected when the first run is circulated and a second order is placed.
Top

Users browsing this forum: No registered users and 1 guest