I know this thread is a few years old, however are there any plans on having another run of name badges being made?
Top

Spacecanada of course would answer correctly, but I recall her telling me she had some blanks.
I would love to get at least one with my SC call sign....
Skidmark
Space Academy: 2012, 2013 and 2014
Advanced Space Academy: 2016 and 2018
Undefeated for winning mission patch designs!
Official Space Camp Ambassador
Top 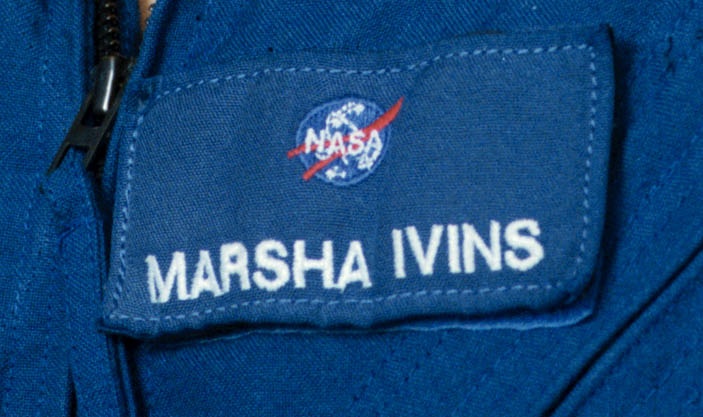 I know this is ancient thread, but I stumbled across this photo and had to put it here. I have never seen one like this before. It must be a really early one, predating the mission specialist wings.
Skidmark
Space Academy: 2012, 2013 and 2014
Advanced Space Academy: 2016 and 2018
Undefeated for winning mission patch designs!
Official Space Camp Ambassador
Top

I would say it's fairly recent. NASA didn't revert back to the meatball until 1997-1998, and she had one mission after that point (STS-98 in 2001). The only photos I've seen of her wearing that badge are more recent pics taken after that time. I haven't seen any other astros with that particular badge, so it's probably a one-off she had made herself.
4-time Space Camp/Academy alumni
1989, 1991*, 1992, 1994
*Right Stuff Award Winner
Top

I've seen some early shuttle program leather name tags with the meatball but never a cloth one like this. And even though the worm was in use until 1993 the meatball still was often worn on flight suits and jackets as well as the worm. Just look at some of the pre challenger astronaut portraits especially in light blue suits.
Jason original callsign Loverboy
SC 1991
SA Level 1 1993
AC Intermediate 1996
ASA 1998
Corporate Space Camp 2005
AC Counselor Summer 07 callsign Boomerang
Adult Alumni Camp 2007
Adult Alumni Camp 2008
Official Space Camp Ambassador
Top
Post Reply
25 posts