You guys have inspired me to put together a flightsuit for myself for the 25th Anniversary:

In a thread a few months back, we were talking about orange launch-and-entry flightsuits, so I decided to go with that, especially since everyone has a blue (or green) one.

Re: New flightsuit for 25th Anniversary

Think I could get away with wearing it to the Rocket Center when I come to visit in a couple of weeks?

Seriously, do NOT make me regret being an alumnus of the University of Tennessee. That? Goes a long, long way.

You kind of look like a wayward museum guide run amok. Get used to pointing people toward the Spacedome Theater, man.
U.S. Space Camp, May 1985
Aviation Challenge Staff, 1996-1997
"Livin' in fear's just another way of dyin' before your time." -- Drive-By Truckers
Top

Is that an ancient Space Academy t-shirt or a newer sweatshirt? They used to make a t-shirt with a big logo but it got replaced, and I dont' think they have made these in years.

I like the look. I don't think the cap is very spacey though.

Hotdog wrote:Joker, did someone piss in your Cheerios this morning?

Lighten up, Francis.
If you're gonna wear that much orange outside the Knox County limits, and you're not about to board the bus to strap in for an eight-and-a-half-minute trip downrange, you should make sure you fit one of the following job descriptions: 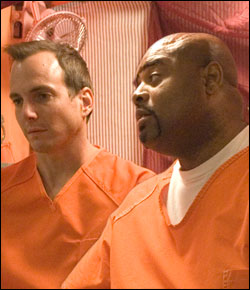 You've been a very bad boy -- up to and including being in the short-to-long term custody of any local, state or federal Department of Corrections -- Maricopa County, AZ excluded.

You've decided to stick it to The Man -- assuming that The Man is Emperor Palpatine. Your job may include flying X-Wing, Y-Wing, B-Wing, A-Wing, and/or Speeder types. This, sadly, also includes Snowspeeder rear gunners -- they're the Rebel equivalent to "self-loading baggage." They'd put droids back there to crew the weapons, but Jawas run the shop in too many places. It's easier to just recruit warm, but minimally effective bodies from aggrieved or oppressed worlds. Stay on target...

If you have The Right Stuff (and no, not the little Space Camp medal), you can pull off that much orange and no one will say jack. YOU tell Wally and Al they're not hardcore. And Gus Grissom's so freakin' hard, he can pull off silver boots with a sage flightsuit. Remember, kids, the hatch didn't just blow -- the Mercury capsule design specifications just didn't accommodate the structural strain of containing Gus's awesomeness in that tiny space.

4) You're Bruce Willis or Ben Affleck.

Something about "armadilloes" and "zero barrier." And "all-go-no-quit," or something to that effect. The popcorn was good, though. And you gotta like the hit-or-miss CGI (hey, it's a fancy fictional military shuttle! Now it's Atlantis! Oh, wait, there are TWO OF THEM!). But Affleck gets cred, cause they let him play in the NBL -- but no amount of cred makes up for "Gigli."

Open the pod bay doors, HAL. And sing that "Daisy" song. It soothes me.

6) Someone just stole the first Firefox prototype.
Adding insult to injury, he also stole your fancy black flightsuit and helmet. So you have to go chase down the Yankee imperialist dog in the only machine fast enough to catch him -- the other MiG-31 airframe. And you have to do it while wearing a bright orange flightsuit and trying to remember how to say "Don't bring snacks into the museum" in Russian.

Ha, funny read. But ya may wanna take your own advice and...

des wrote:Is that an ancient Space Academy t-shirt or a newer sweatshirt? They used to make a t-shirt with a big logo but it got replaced, and I dont' think they have made these in years.
--des

Sort of. It's just a t-shirt, like the one seen here: http://spacecamp.ibnerd.net/main.php?g2_itemId=6227

Hotdog wrote:Ha, funny read. But ya may wanna take your own advice and...

You're a funny, funny man, Hotdog. Really. Especially considering that I'm not heavy about the issue in the least. Read your response -- I'm not the one who needs to lighten up, though I definitely will. I plan to spend next weekend at the beach watching the STS-117 launch, so that'll be delightful. I'll have a nice bourbon for absent companions, a light umbrella drink in your honor, and then pour some out for my homies.

But you asked if you could get away with wearing a bright orange flight suit with your personal patches on it. No one's going to arrest you for it, and you're well within your rights to do so. It's just a far, far braver move than I'd make. Then again, I've seen what some counselors do to their flight suits, so probably no one would bat an eye if you rolled in hot and visible.

If you don't want to hear a response you don't like, even if it's friendly ribbing (which was my intent), don't ask the question on the Internet.

First things first as read once in "Twisted Mego Theatre..."

"You made a fool out of young lieutenants. That's not against Army regulations."

I don't think so, as I got a new one in mid 1990s I think. I don't wash it/wear it much but it is kind of getting frayed along the edges. And oh the infamous shorts. I wonder who they are designed to fit, as they never fit me, and consequently I still have them. I occassionally wear them to clean house as they really aren't entirely decent. (I'll let ya'll figure this one out.)

Btw, seriously-- well not really-- about all that orange. If you don't have the badges it DOES look like a prison outfit!! I had kind of thought of uniforms for my little space camp and thought about orange, but it just looked so prisonish. OTOH, I don't think this one here looks too prisonish, but I didn't look from behind. You wouldn't want someone to think you are an escapee from Alabama corrections.

Scrubs are about the easiest way to get one color, and they really like escaped convicts.


Maybe some of that ribbonish stuff like they have on band or military uniforms in the back? One of these over each shoulder.
I think a NASA cap would look good.

des wrote:Is that an ancient Space Academy t-shirt or a newer sweatshirt? They used to make a t-shirt with a big logo but it got replaced, and I dont' think they have made these in years.
--des

Sort of. It's just a t-shirt, like the one seen here: http://spacecamp.ibnerd.net/main.php?g2_itemId=6227

i still have a couple of them, along with the cobalt blue shorts

Joker, did someone piss in your Cheerios this morning?

Thanks for the General Mills plug! (I recently worked in Cheerios product development.)
Chris

Yeah, but I don't think p** and Cheerios is exactly a great breakfast favorite.

Joker, did someone piss in your Cheerios this morning?

Thanks for the General Mills plug! (I recently worked in Cheerios product development.)

Well this thread has reached a low not seen in some time!

And Joker, this isn't the Barracks. Please tread lightly.
Top